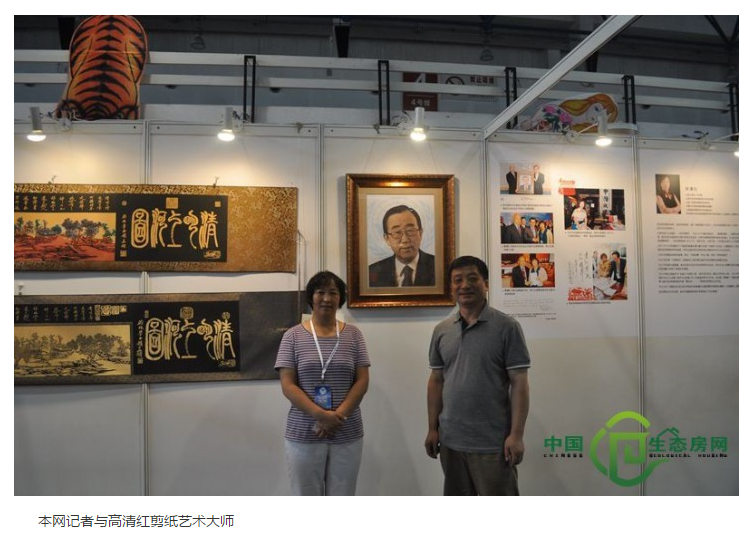 In the main wall of the first floor of the United Nations Office Building in New York, according to the tradition of the United Nations, the portrait of Ban Ki Moon, who is about to expire, will also be hung up. Different from the portraits of previous secretaries general, the portrait of Ban Ki Moon is not an oil painting, but a paper-cut work of high-definition red, a paper-cut artist of Guangling, Shanxi Province, China, so as to make Chinese folk paper-cut art into the world The highest palace of the world.

Growing in the fertile soil of paper cutting art

Guangling County, which is located in the northeast of Shanxi Province, has a paper-cut history of more than 3000 years. According to the chapter "Lu's spring and Autumn Annals · Chongyan", King Chengwang of Zhou Dynasty and his brother Shuyu cut Tung leaves into Yugui and handed them to Shuyu, saying, "I'll use this to seal you up." A few days later, Duke of Zhou asked King Cheng of Zhou to choose Jiri to make Shuyu a vassal. King Cheng said, "I'm kidding him." Zhou gongdao: "the son of heaven has no joking words. What the emperor said, the Historiographer should record it truthfully, the musicians should recite it, and the scholar officials should publicize it. " It is said that this is the earliest paper-cut prototype. In the paper-cut works, not only shows the author's artistic concept, but also contains a kind of integrity.

In 1972, HD Hong was born in a paper-cut family at the foot of Doushan mountain in Guangling county. His mother is a famous local paper-cut artist. Under his mother's influence, he had a special love for paper cutting since he was young. From the age of 4, he learned to make paper-cut with his grandmother and his mother. From then on, a good wish has sprouted in high-definition hearts. He wants to cut more beautiful window decorations (paper cuts) like his mother, so that more people can paste them on the windows. Interest is the biggest motivation, it is this hobby, she created a lot of paper-cut works in junior high school.

At the age of 21, HD Hong entered the county cement plant to work. Although she was busy working, she kept cutting paper. In Guangling, a fertile land with a long tradition of paper-cut art, in addition to inheriting the art skills of paper-cut (window decoration) handed down by her family, she also sincerely consulted and innovated the paper-cut talents around her. Finally, she made her own works on the world's highest stage and pushed the traditional Chinese paper-cut art forward The world. She has also become the sixth generation of Guangling paper-cut art and a national master of Arts and crafts in China. 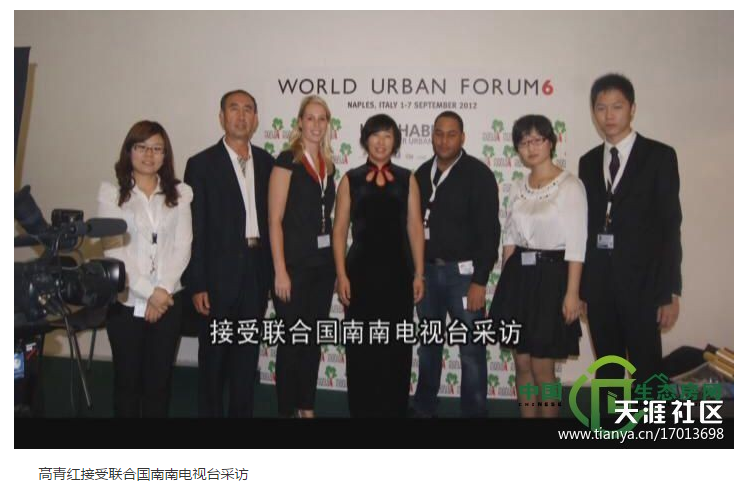 Entrepreneurship and growth of grassroots Art

In 1996, HD Hong rented a house in the county, took in six apprentices, and set up the Qinghong portrait art studio. Under her professor, a group of ingenious and skilled paper-cut artists quickly grew up. Over the past 16 years, she has transformed a small workshop into an existing exhibition hall and production workshop, covering an area of more than 3000 square meters. The culture and art company, which can carry out creative design, multi-layer production, outer frame processing and supporting mounting, is the training base of national sunshine project and rain dew project, and has trained more than 1000 paper-cut talents for the country.

Although "Guangling Qinghong paper cutting" has become a well-known local brand, how to go to the market and let more people recognize this traditional folk art makes HD red encounter a series of problems.

The first is the content of the work. The Chinese paper-cut art originated from the folk. The main content of its expression has been the flowers, birds, fish and animals in nature and people's wishes for happiness, wealth, happiness and longevity. Let people have a kind of "window decorations change year by year, only red paper new" feeling. How to make the traditional theme glow with new ideas, high definition red worked hard. She was inspired by the sentence "the more national, the more world-wide". Drawing on the drawing methods of art works such as painting and ceramic art, she boldly designed and created the famous painting "riverside painting at Qingming Festival" by Zhang Zeduan of Song Dynasty with paper cutting art, which was a hit.

The second is the collection and preservation of paper-cut art works. Although Chinese paper-cut art has a history of more than 3000 years, it should be said that all dynasties should have exquisite works, but no physical works have been handed down. The main reason is that the paper-cut works are cut and carved, and the patterns are composed of lines or blocks, which move the whole body by pulling one hair, plus the different materials and the effect of mounting technology Therefore, how to preserve paper-cut works well and make them have collection value is another problem faced by HD red.

High definition red always thinks that art lies in innovation. Only innovative art can have more vigorous vitality. Therefore, on the basis of inheriting Guangling's traditional paper-cut art, she made a concentrated exploration on paper-cut art. She adopted dry mounting method to overcome the problem of "difficult mounting and easy fading" in paper cutting. Now Guangling paper-cut, which is framed by her company, is of higher grade and more valuable for art collection.

The 2008 Olympic Games provided an opportunity for HD Hong's artistic creation to show. In order to show the joy of the people all over the country looking forward to the Olympic Games, she decided to cut a large-scale paper-cut art work of "56 nationalities meet the Olympic Games". In order to make the works achieve the best artistic effect and let foreign friends appreciate the broad and profound art treasures of the Chinese nation, HD red has carried out the most perfect conception and design. After more than two months of creativity and more than six months of production, the giant paper-cut work of 3m in width and 3.3m in length has been successfully completed.

On August 8, 2008, with the rising of the Olympic flag, the huge paper-cut works of high-definition red were also displayed in Xiangyun cottage. International friends from five continents, after enjoying the high-definition red paper-cut works, all extended their thumbs and praised the magic of Oriental national culture. During the Olympic Games, she also exhibited paper-cut works of "Xiangyun peony", "Chinese story" and "the Great Wall". For this reason, HD red paper cutting works were awarded special contribution award by the Olympic cultural activities division of the cultural activities department of the Olympic Organizing Committee. 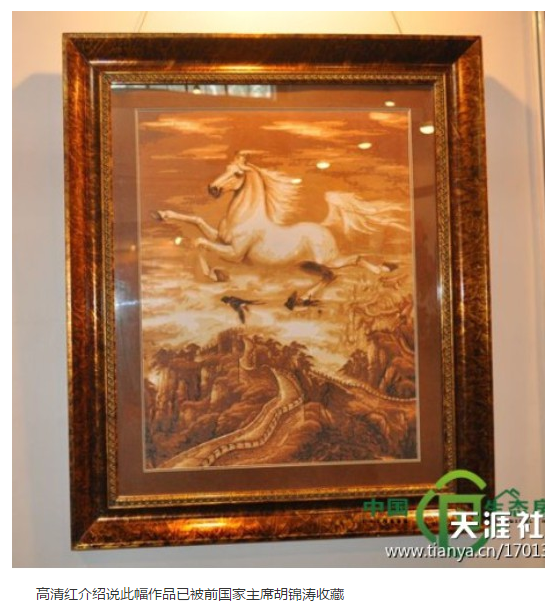 With the high-definition red in the paper-cut art achievement is higher and higher, the honor is more and more, the fame is also growing.

In Daqing, the 60th anniversary of the people's Republic of China in 2009, at the invitation of the Chinese Folk Artists Association, HD Hong designed a 6-meter-long giant paper-cut "Huaqing", which was exhibited in Beijing National Culture Palace in July that year. At the same time, her own production of "World Expo love" was selected by the Shanghai World Expo.

In June 2011, he participated in the paper-cut art show "charming Datong" of CCTV Happy China trip.

In 2007, HD Hong was awarded the "Chinese paper-cut moral and artistic double Xin Award" by the culture and Traditional Culture Committee of the people's Republic of China and the China Arts and Crafts Association.

After consulting a large number of pictures and materials of the three international dignitaries, and understanding the personalities of these three figures, and through more than a month of design and production, these works representing the highest achievements of Chinese paper-cut art have finally made their appearance on the stage of the United Nations.

Mr. Jiang Mingjun, executive chairman of the United Nations ecological security cooperation, said at a press conference before he went to the United Nations to present portraits: "paper cutting art is the world's intangible cultural heritage, which can fully represent the artistic value of China. Through these three portraits, it is very meaningful to promote China's paper cutting art and enhance the image of Chinese culture and art."

Now, China's paper-cut art has been incorporated into the youth employment training program of the United Nations, and HD Hong has become the chief executive officer of the International Youth technology training base of the international eco security cooperation organization.

In recent years, high-definition red paper-cut art is more and more popular among people all over the world. At the UN Economic and Social Council and the conference on ecological security and scientific and technological innovation in Geneva, many countries invited HD Hong to hold exhibitions and lectures to teach Chinese paper-cut art.

Asian Film Association: preparation work for "sonorous youth" and "all the way" was launched