It was introduced that Mr. Guo Chunmao was born in Shanwei, Guangdong Province. He was in his prime of life. When he was young, he learned Chinese characters to the extreme. After many years of traveling, I have seen many stele inscriptions, understood the theory of calligraphy, got the guidance of teachers and friends, knew the style of writing, recognized the sharp point, and then could write, learned ten thousand millionths of strength, explored the beauty of the extreme lines, the beauty of the extreme lines, the formation of the characters, and the realization of the knowledge, thus forming a book. There are a lot of students who found Yunshan calligraphy, and they are called "Yunshan calligraphy". He is closely related to the calligraphy circle in Henan Province. He held an exhibition in Zhumadian. He wrote more than 60 works in 15 days, including more than 30 kinds of fonts and forms, and more than 20 kinds of calligraphy or temporary works. 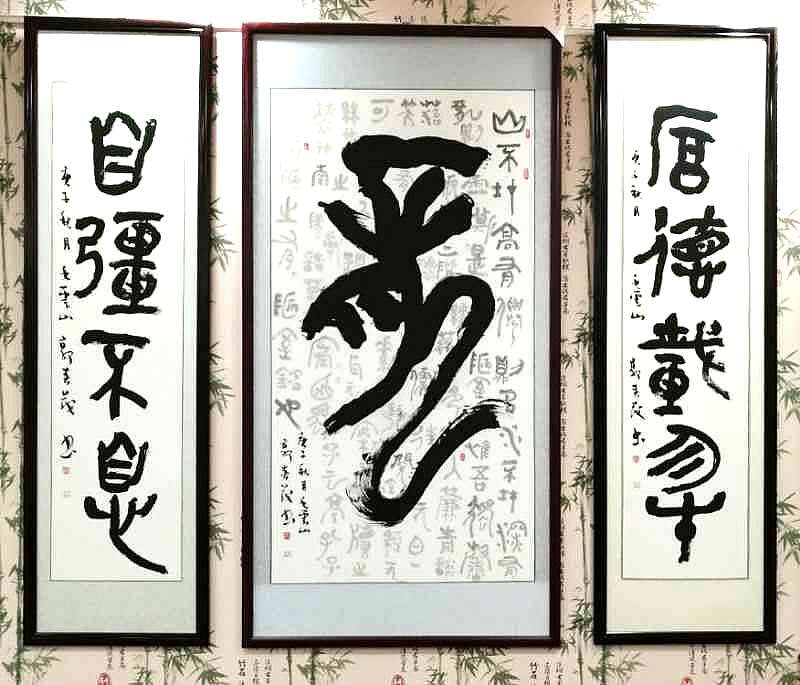 On a closer look, there are various calligraphic works and temporary works, such as the marvelous and wonderful appearance of Sanshi plate, the ancient simplicity and magnificence of stone drum inscriptions; the quiet and simple elegance of official script such as Zhang Qian's stele, ritual utensil tablet and Cao Quan tablet. Among them, Zhang Qian's full-text temporary work, with more than 600 characters on the whole six feet of paper, has been introduced and learned that it was a few hours of writing, and the writing was done without hesitation It should be a rare temporary masterpiece about Zhang Qian's stele in history.

After staring at it for a long time, I wonder whether this work will become a masterpiece handed down from generation to generation? There are also Zhong Yao's elaborate expression, the vigorous and majestic writing of Vajra Sutra, the gloomy, winding, slender and graceful Ode to Shimen, the melancholy and gentle woman Zhang Hei, the graceful and elegant appearance of Zhang Menglong, the majestic, simple and elegant writing style of Zhang Menglong, and the Yin Fu Scripture, which is the most difficult to write in regular script, is elegant and elegant. It has the Maju mountain immortal altar's atmosphere, though regular as grass I'm free and easy.

All kinds of classic and interesting, each work reveals the writer's extraordinary skill and deep understanding of the inscription. There are also works of running grass, such as Wang Xizhi's seventeen pieces, Orchid Pavilion preface and holy religion preface, sun Guoting's book notation, Zhang Xu's four ancient poems, Wang Chong's poems of seeing off friends and students on a trip to Maoshan mountain, etc., which are vivid, elegant and graceful. In addition, Mr. Guo Chunmao's other various fonts are colorful and colorful. Sometimes they are flexible and elegant, sometimes majestic, thin but not empty, heavy but not stagnant. They are quiet like virgins, moving like rabbits, sometimes like trickling streams, sometimes like towering mountains, there are thousands of collapsing clouds and falling stones, and there are those who are gentle and elegant. Different book styles move according to the situation, and the rare thing is that they are free to spread without exceeding the rules 。 The small exhibition hall, however, is a calligraphy feast, which is very exciting and respectful. 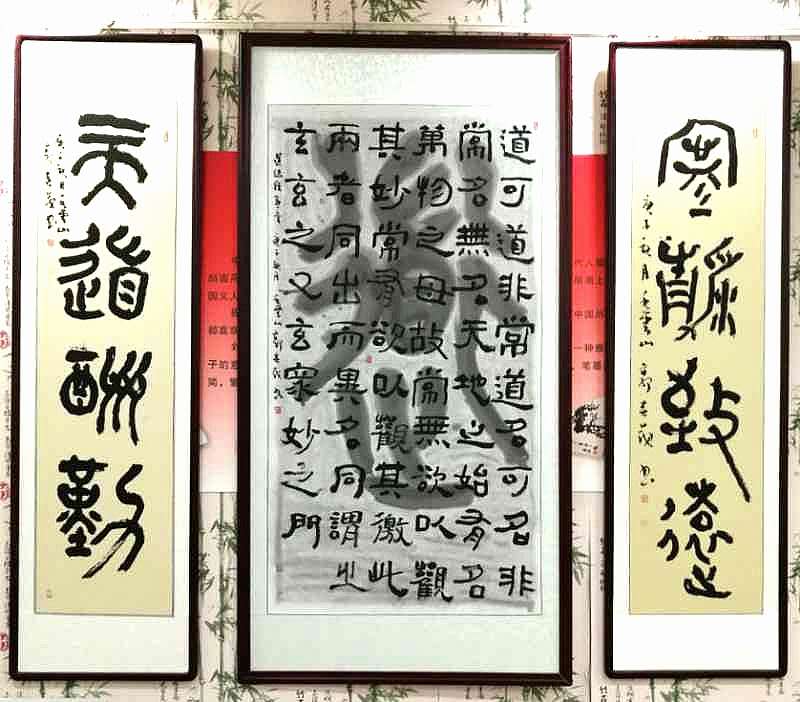 There are leakage marks in the vertical and horizontal rooms, and the beautiful cone painting sand. There are two exhibition halls of more than 100 square meters in size. The view is magnificent and the thinking is magical. One person's handwriting, 15 days' writing, more than 60 pieces of works, and more than 30 kinds of fonts and forms are rare in the world. House leak mark, cone painting sand, folding fork, printing ink, all kinds of strokes, all kinds of momentum, all kinds of spirit, all kinds of soft, all kinds of free and easy, no matter big and small characters, no false hair, no rigid line. On closer inspection, the line must be the acme, strong, flexible, beautiful and natural; the words have rhyme, and all the articles have gods, so the so-called beauty is too much!

Although the exhibition is not large in scale, it is splendid. Among them, the most striking one is a huge "dragon" of six feet in length. The pen is simple and gloomy, and the posture is graceful and flexible. It is based on the full text of the inscription of the humble chamber in the seal script. The two pieces of work of the seal character "carrying things with great virtue and constantly striving for self-improvement" on both sides are vigorous and majestic, reflecting the spirit and virtue of the dragon in Chinese culture Good sentiment. There are three screens in the first chapter of Mr. Guo's stone drum essay. The ink and brush are almost in the state of transformation. The lines are firm and the body is quiet. The view is harmonious and the spirit is far away. What is most amazing is the grass seal script created by Guo Chunmao himself. "There will be times when the wind blows and the waves, and the cloud sails will be straight to the sea." the cursive script of seal script is characterized by movement in stillness and stillness in movement. It will wither when it is thick, and it will be dry and moist. If you can't control the brush freely, or if you can't achieve the unity of mind and hand, you can't write it. Through Mr. Guo Chunmao's calligraphy works, we can feel that "the law is right and the feeling is true, the rhyme is elegant and the calligraphy is beautiful". At the same time, we can also feel his literary talent and elegant demeanor. He is a calligrapher full of talent.

Mr. Guo Chunmao has always been committed to the exploration and popularization of calligraphy art, in order to promote what he knows and learned. He advocates that those who learn calligraphy must first understand Feng Hao, and then understand the beauty of lines in stone drum inscriptions, and then in Zhang Qian's stele, to know the use of Feng Hao. Then he should write cursive and regular script. He will make progress every day, or achieve great success, and be able to write 100 styles. Mr. Guo tells of his calligraphy, hoping to make it clear to the present and benefit future generations. Mr. Guo's learning and writing, I believe that this is a clear flow, will continue to flow on the land of Chinese calligraphy.

Through the visit to the book fair and the exchange with Mr. Guo Chunmao, I was surprised and thought a lot at the same time. It is not easy for ordinary people to write a good font. Why can Mr. Guo Chunmao be able to do all kinds of writing and reach a certain height? Since ancient times, it has been said that the writing method has never been easy. What is the content? Can we find the right direction in Mr. Guo Chunmao's calligraphy? What will be the impact of the Yunshan Shudao founded by Guo Chunmao on you and later generations? And how do we deal with Guo Chunmao's calligraphy content? If you teach by the riverside, you are afraid of Jackie Chan. It can be expected that, with the profound attainments and brilliant talent of Mr. Guo's calligraphy, as well as his assiduous pursuit of calligraphy, he will surely become a calligrapher of a generation, leaving a heavy color and thick ink in the history of calligraphy.

(Chen Yunfa, editor in charge of the legal news network)